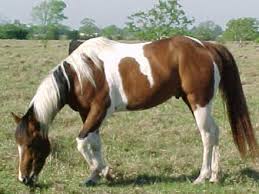 In Spanish the word is pintado, which means painted - or if you're a cowboy, you'd simply call these horses, paint.  Another term used for these animals, because of their spots or partial coloring, is calico.  This breed is nearly identical to the American Quarter Horse, however the only difference is the color.  Many people are of the opinion that, because the Painted Horse is just like the Quarter Horse but with a splash of color, they are truly some of the most beautiful and exquisite horses in the world.

Spanish explorers in the 16th Century, brought their Spotted War Horses with them on the voyage to the new continent.  A historian noted one of these horses was white and sorrel with belly spots. It is believed this horse birthed the American Painted Horse breed of today, by breeding with American Mustangs.

The Spotted Horse became very popular among the Native Americans by the early 19th century.  In fact, it was recorded they were prominently seen among the Comanche herds.

The American Paint Stock Horse Association was created in 1962, and in one year grew to 250 registered horses and 150 members.  At the same time, The Paint Quarter Horse Association was formed, as well.  These groups eventually merged by 1965.  The Painted Horse breed has become the second most popular breed in the United States over a very short period of time. Their Foundation is the same as the Quarter Horse except for the color.

Considered a stock-type horse, these animals are balanced, close coupled, built close to the ground and muscular.  They are powerful, athletic and fast due to their substantial hindquarter and forearm muscles.

Though some horses are solid, the patterns usually include the following:

- Overo: White is not usually on the back.  At least one, and sometimes all four legs are dark.  The white is irregular, splashy and scattered.  Usually head markings are apron-faced, bonnet-faced or bald-faced.  May be mostly dark or white and the tail is most often one color.

- Tobiano: A dark color usually covers both or one flank.  Four legs, usually lower, are most often white. The spots are regular and distinct shapes like oval or round, and go to the chest or neck, which looks like a shield.  Head markings can range from solid to strip, star, snip or blaze.  May be mostly dark or white with a two-color tail.

- Tovero: The ears, forehead and/or eyes my have dark pigmentation, which may also extend to the mouth and face.  Either one or both eyes can be blue. Spots on the chest vary in size and may extend to the neck.  Spot on the flank vary in size often much smaller spots will cross the barrel and loin. The tail may also have varying sized spots.

For a Painted Horse to be eligible for registration, only a minimal amount of white hair can be over unpigmented, or pink skin.

Beautiful horses and love working em.. I broke a paint a few years ago. She was the type of horse you can drop the reigns, walk a little ways away, pick up whatever you're after and she wouldn't take a step. Even had her where you can stop her, drop the reigns, stand up in the saddle and nail something higher up rather than find a ladder.

Due to the delay experienced all over the globe on the supply chain, we have also been affected, by not being able to get all of our products in a timely manner. This is why we can not guarantee to get your products shipped on time but will ship asap as they arrive.   Custom-made items are running double the normal time.

STOCK ITEMS UPDATE:  Not all items are in stock due to the current economic conditions several of our suppliers are out of stock and behind in shipments to us. Please if you need an order express shipping be sure to call first or send an email.  All Custom orders have to be built so please use standard shipping.